TCM is showing "Mr. Blandings Builds His Dream House", thus the title for this post. Cary Grant and Myrna Loy are a New York city couple who buy a dilapidated house in Connecticut and decide to fix it up, instead of razing it and starting anew. As you can imagine, hilarity ensues.

This is exactly where I am in the new book, although I'm not certain that hilarity will follow. I started writing a fantasy about a girl pirate some time ago. It began as a riff on "The Count of Monte Cristo." A young girl is betrayed by her friends and is carried off by pirates to be sold to a wealthy psycho. She avoids her fate, becomes a wealthy pirate, and returns home to collect her pound of flesh from her so-called friends.

When I started writing, the book was in third person, and the young noblewoman, Lisette, is betrothed to another noble, but is more attracted to the village farrier. The farrier is teaching Lisette to fight with a sword, much against her mother's wishes. Lisette is an independent girl, straining at society's leash, but aware that her obedience is necessary to serve the family she loves.

My first change of heart was with the voice of the book. I've decided first person would be better. The reader needs to bond with Lisette. I went back through what I'd written and edited it to reflect "I, me, mine" instead of "she, her, hers."

Then I dreamed of dragons. I'm writing a fantasy - shouldn't there be dragons? Not just dragons for dragons' sake. My theme is revenge. Its cost. Its rewards. Vengeance is a favorite topic at the moment, if you read the news. But does the prize justify the price?

I invented a new myth, the myth of Blood-dragons. In my myth, blood-dragons are horse-sized creatures, and were once human. If a human has been wronged egregiously (either murder of a loved one or personal ruin), and cannot get retribution, they can appropriate the blood of one of these creatures. One drop on their lips will turn them into a blood-dragon.

They remain human during daylight, and only morph (dusk til dawn) for the 10 days from the waning crescent to the waxing crescent of the moon. To defeat their enemy, they have tough skin, long talons, fire breath, oh, and a little bit of magic, mostly in the form of hypnosis and mind control. And while they are a blood-dragon, they are immortal.

Once a blood-dragon either avenges their wrong or no longer feels the need for revenge, the spell is broken and they return to their mortal, normal human state. They have one year to fulfill their thirst for revenge. If they fail, or if their heart is still black with hate, they will remain a blood-dragon forever.

All this means that I must raze the old story and build a new one. Good thing I've got all day to wait for the new floors to arrive.

These have a general look of the dragon I'm dreaming about, with some changes. 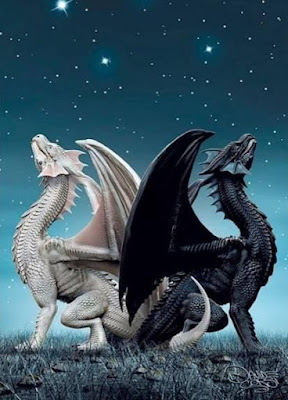 What do you think?

Posted by Gayle Carline at 11:16 AM No comments:

Tomorrow kicks off the traditional holiday season, and I'm torn between weeping from sentiment and weeping from sadness. The tears seem to come from different directions, but perhaps they are two branches of the same river.

My love and gratitude for family and friends bubbles over into sentimentality. My sadness at what's going on in the world wounds me to my soul. Each of these feeds the other--I fear for my loved ones, because I'm aware of how much I love them, and want them to be safe, because...

I'm sure you get the idea.

The world is in such a state, such a state. There is much to fear, and of everything, I think I'm most afraid of being afraid. Churchill was right. A fearful creature assumes "fight or flight" position. If I am afraid of the world, I shall either lock all the doors and hide away, or get out the kitchen knives and prepare to meet my enemies.

And when you're afraid, everyone's your enemy.

Full disclosure: you can call me a bleeding heart. I don't like the term "liberal" any more than I like "conservative." I don't understand what those terms mean anymore. I'm a woman who sees pain in the world and wants to make it go away. I know I haven't seen the seamy underbelly of human existence, and I do believe there are people who are evil. Believe it or not, I do believe in the death penalty for some people. I'm just not willing to paint everyone with one broad stroke.

I'm also not willing to be so afraid of the world that I want to turn people away from our borders, or tag people because they belong to the "wrong" religion or in any way treat people as though they are not the same as me.

And seeing the frailty of life makes me want to keep my loved ones even closer. I want to hug a little tighter, linger a little longer, share all the moments with all the feels. I even want to spend more time with my pets. My life seems so full of blessings, I think I might explode with joy.

This Thanksgiving, I'm all sappy with gratitude for what I have, and aware of what others need. Now more than ever, I possess a deep desire to make life better in my little corner of the world, and hope I can pass the torch to someone else for their corner.

Recently, I got a snippet-of-a-snippet of a song stuck in my head. I went to the internet to find the rest of the song, and I was surprised at how timely it was.

I know we can make it if we try.

Posted by Gayle Carline at 4:42 PM No comments:

I'm supposed to be editing, but it's Sunday evening and I just got home from a really fun wine tasting with my horse buddies, and everyone knows you write drunk and edit sober. I'm not technically drunk, or even buzzing, but I'm using that saying to take a brief break.

This post was supposed to be about my son and his last recital and how it all went down. This was his composition recital. According to him, the concert was for "people who really love him." I wasn't certain what to expect, but I confess I was disappointed when he told me he wouldn't be performing any of the music.

"The professors don't want us writing music for ourselves," he told me. "Which is weird, since most successful artists are the ones that write their own music."

Anyway, what we were treated to was a portfolio of what he can do. There were pieces for different instruments, songs for soloists and choirs, scores for film, all culminating in a 20-minute "student project."

All in all, everything was musical and entertaining, and not as weird and atonal and "out there" as I thought it might be. Being his mom, I get all sparkly-eyed when I hear anything he does, so I'm no judge as to whether the music was good, but the audience liked it.


"It Was Beginning Winter"

And then, he stepped on stage and conducted his student project, and I was sent into a deep, meaningful thought process for days. I'd like to tell you about the music, but honestly, I don't remember the music. I only remember the feelings.

The name of the piece was "It's All Too Much," and it began with a statement that we are overwhelmed with information via the internet and the media, followed by examples proving that statement. The examples built up, from benign information, to the daily bad news we are bombarded with, until the entire orchestra, singers, and even Marcus were screaming at each other about all the horrors in the news, what should be done about them, and an insistence that ignoring a tragedy makes one an emotional Nazi.

As the screams reached a crescendo, Marcus stormed off the stage, then there was a sudden silence, followed by music and a song/recitation of a web comic called CatFoxWolf on tumblr, titled "Disquiet." (it's in three parts, the Part one beginning here - http://catfoxwolf.tumblr.com/post/56075944959/disquiet-part-i-of-ii-part-ii-is-here-i). Basically, the idea in the comic is that we are an amazing species, built by incredible circumstances, with such a unique and complex range of emotions, it would be insane to think we should confine ourselves to just "happy."

As much as we sometimes fight against some of our more raw, frightening feelings, they are necessary in order to be our full selves. And the last line of the comic, the last line of Marcus' piece, was so Marcus, I wanted to weep:

I was all set to discuss this generation and the grand possibility that they were embracing their feelings and we would someday see the end of Strength = Not Feeling, Real Men (or Big Girls) Don't Cry, and know that we were moving toward enlightenment.

Then I saw two things on Facebook, of different weights, but the same feeling. One of my friends posted today was the anniversary of her son's death. Another friend posted that her dog had (much wanted) puppies, and they had all died. I know there is no comparison between a human and a puppy, but the awfulness is still there, that here is New Life, wrapped in Joy and Expectations, and Life is Not. Supposed. To. Do. This.

And I feel all the bad feelings of grief and anger and poignancy, and I don't want to. I'd rather not be such a normal, unique being and have these emotions. But they make the other feelings, of happiness and sweet joy, so much bigger.

So this post is a reminder to cherish all the feels, whether you like them or not. Hug your children, too. 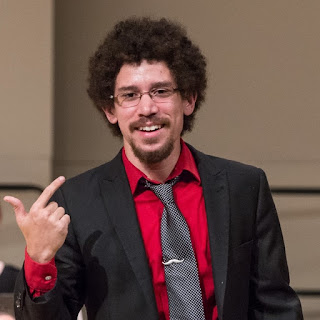