Go ahead. Debate me. Or not.

This morning I went to see my very awesome dermatologist, Dr. Hsu, who used her freeze-ray gun to zap a number of moles and blemishes on my person (I did complain that I always leave her feeling like I've been electrocuted). As she was zapping me, I was making little "pew-pew" noises in my head, mostly to distract myself from the discomfort. I got to thinking about STAR WARS and I realized something.

They should have never made those prequels.

Before I'm branded a heretic, hear me out. I have two reasons for my statement (and sincere apologies to Mr. Lucas, I still love the storyline).

1. The first trilogy had elements to it that made it immensely entertaining. It was action/adventure, a space Western-Samurai movie, full of pew-pew fights with lively banter in between. We went with this story happily, giddily, because we knew that the hero and his plucky band of rebels would win. Good would triumph over evil. We were not disappointed. 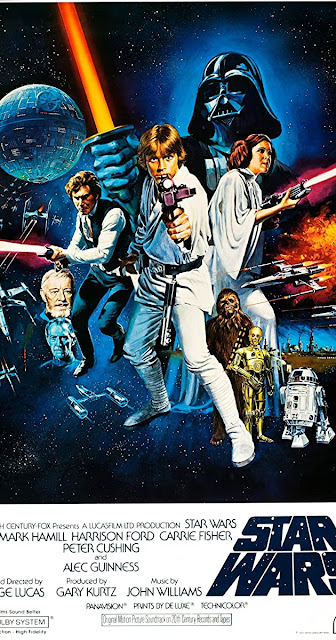 The prequel is all about Anakin's descent into Vader, the destruction of the Jedi, and the rise of the Empire. It is not a happy story. The hero does not win because there is no hero. It's grim on top of grim with a side of grim. The pew-pew fighting wasn't adventurous fun, it was a desperate struggle to survive. And let's just forget Jar Jar ever happened. He was the only comic relief and he wasn't funny.

I get it--this is the only story to be told, the story of how things came to be the way they were before Luke Skywalker looked up at the double moons and chafed against life as a farm boy. Which leads me to...

2. At the end of all discussions, the prequel trilogy is backstory. It's a prologue. How many of you actually read a prologue in a book? True confession: I'll read them if they're 1-2 pages and not italicized. If I see one going on longer, I skip it. Sometimes I skip the whole book.

What are we writers told about writing backstory? You don't plop it all into the front of the book, or any place in the book, in a big lump of "here's what happened before Chapter 1." You sprinkle it throughout the story, using it right before it's needed. There is no need to give me several pages describing your character's PTSD prior to Chapter 1 if I need to connect with that PTSD in Chapter 10.

You certainly don't need three movies to explain it.

By the end of the RETURN OF THE JEDI, I had received all the backstory I needed. Empire bad, Rebels good. Vader bad, Jedi good. Vader is Luke's father, Luke rejects Dark Side, Good conquers Evil. Did the prequels tell me anything else I needed to know?

I think not, although I guess your mileage may vary.

Posted by Gayle Carline at 9:30 PM No comments:

If your best day was your last

We had a recent scare with our golden retriever, Lady Spazzleton. She came to us in June 2012 as a rescue. At the time, the vet estimated her age at between 4 and 6. When she had to have her spleen removed in 2016, the vet told us she had typical problems for an older dog.

She's got arthritis and sleeps a lot, but plays with Duffy the corgi, bouncing on her stiff legs, tail wagging, still a puppy inside that old frame. I know her days are numbered but every day she's the same happy-go-lucky dog with no complaints.

On Wednesday, she began having intestinal issues, refusing to eat, throwing up, etc. Fearing a blockage, I got her into the vet Thursday morning, who ran every test they could plus x-rays and diagnosed her with colitis. I breathed a sigh of relief.

At 14, she could not have survived surgery for a blockage.

For two more days I watched her lay around, lethargic, refusing to eat. She would drink water then go throw it up in the yard. Her face was drawn. She was in pain, and I started to wonder whether it was "time." 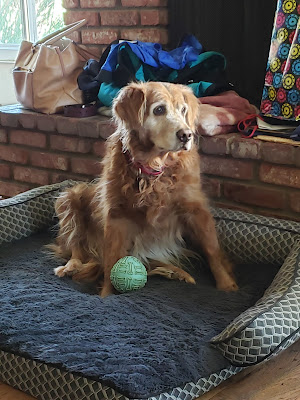 I have two different friends who told me of having to put down their pets. In both cases, they said their fur-babies were on the decline, couldn't get out of bed without assistance, ate minimal amounts of food, etc. And then a day came when the pets got up, ran around, played like they were two-year-olds again, and THAT was the day my friends took them in to be euthanized. And at the time of their telling their stories, I thought, "NO, but they're feeling GOOD!"

Lady Spazz was so sick, so sick. I hovered over her for four days, stuffing pills down her dry throat, sitting with her on her very dirty, dog-hairy bed, watching her pain, talking to her. The vet's office was closed (yay, New Year's) so if she needed more professional help, we'd have to take her to the emergency clinic.

I couldn't stand the thought of her being so sick and being hefted into the back of our car and driven to strangers, who might possibly be responsible for sending her to that dreamless sleep. To feel like utter crap and then die? Perhaps living your best day ever on your last day isn't so bad. 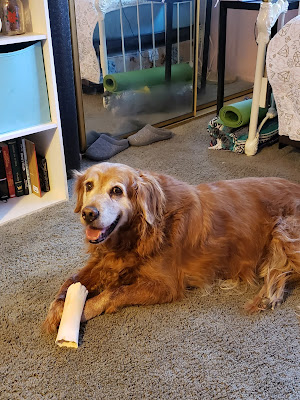 Fortunately, by Saturday afternoon she began to rally and ate a little chicken. On Sunday, she was ravenous and ate breakfast and dinner with great enthusiasm. She was back to wandering about the yard, finding me to lay at my feet, and sleeping by my bed.

I know she is an old dog, and that I am losing her piece by piece. My prayer is that she makes the decision someday, to stretch out on the warm patio in the sun, close her eyes and take the last breath. Failing that, I pray for the wisdom to help her if she needs it when "the time" comes.

Posted by Gayle Carline at 10:55 PM No comments: