It's a month until BLOOD DRAGON RISING is released to the public. Here's what you should know about that:

1. The Kindle version will be on sale for 99 cents for about a week. Its regular price will be $6.99, so get it while it's hot. You can still pre-order it on Amazon, https://www.amazon.com/Blood-Dragon-Rising-Shadows-Book-ebook/dp/B09XQV24DW/

2. The paperback version is available at any online bookseller, or you may order it from any physical store.

3. The AUTOGRAPHED paperback version will be available at my author booth in Tri-City Park during the Placentia Heritage Day Festival on October 8, 2022. Stop by if you're in the neighborhood! 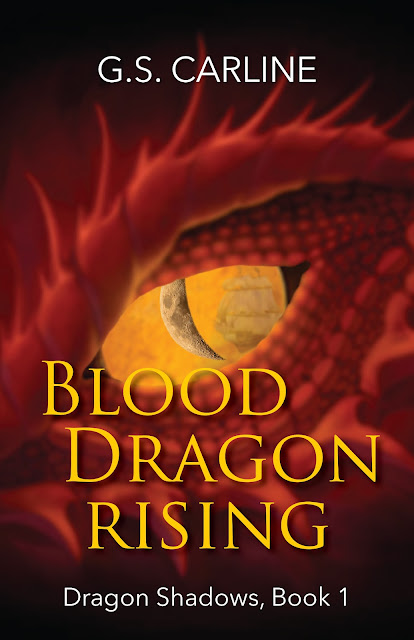 In the meantime, here's another excerpt to tease you:

Lisette had never witnessed an actual sword fight. Her own training had been done with Jules and kept a secret from Mama. Even the most vigorous matches she’d seen had the look of a dance. This was ruthless, no fancy footwork or graceful thrusts. The men battled around the table, over the bed and back toward the door, jabbing and taking wild swings, each aiming for the other’s torso.

She tried to find a safe corner, but it was nearly impossible. As she backed around the table, attempting to avoid them, she became aware of the dagger in her hand. She had not let go when she stabbed the Spanish pig.

The Spaniard had trapped Rocco against the wall. Rocco stepped aside, tripping on the edge of her discarded gown. His leg slid out from under him and slammed him to the floor. The Spaniard raised his sword to bring it down on the captain’s vitals.

Without hesitation, Lisette leapt behind the stranger and pushed the dagger into his back. It slid easily between bones through the meat to the softness inside. She kicked the back of his knees and shoved him down beside Rocco. He fell, his weight pulling the dagger out, leaving the hilt in her grip. Blood covered the blade, up to her hand. She froze, staring at the body, blood staining the Spaniard’s coat and pooling on the floor.

He groaned and attempted to stand. Rocco jumped to his feet and put an end to the man’s complaints with a slash of his longsword. He ran toward the door, turning at the last moment.

“Thank you. Now, bolt the door behind me.”

Lisette continued to stare at the dead man. Blood formed a ribbon of red around his waist and gathered under his arm. His last breath had stopped the fountain. She was glad his face was turned away, where his eyes could not see her. His sword lay just beyond his right hand.

Trembling, she looked down at the dagger, her heart pounding viciously. The blood on the blade turned her stomach while adrenaline pumped her with excitement. Her head felt light and her eyesight blurry. Above, the sounds of swords and guns and guttural screams seeped into the room, but inside these four walls, there was an absence of noise as if silence swallowed even a whisper.

Rocco told her to bolt the door, stay inside, but that seemed impossible. The sounds of the battle frightened and intrigued her. If she stayed one more moment, she would start screaming and never stop. She reached across the dead man to take his sword, feeling its heft.

This is not my fight. I have no experience. Well, practically none. Julian taught me to fence, but we didn’t actually battle. Not like this.

Still, she could not stay here without going mad. Desperation took her out the door and up the steps. If she could get away from the dead man and breathe fresh air, she might feel better.

On deck, however, there were more dead men and less fresh air. Her eyes watered from the stench of smoke and gunpowder and men and death. Most of the fighting was on El Águila Negro, but there were still a few Spanish sailors trying to claim the helm of Rocco’s ship.

A burly man in a uniform caught her attention. He was hacking at the rope that held the mainsail. His attempt to disable the ship alarmed her—what if she was stuck in the middle of the ocean with these brigands?

“Stop that!” She stomped her foot.

The man turned his head, spit the word, “wench,” and went back to sawing at the ropes.

“I am not a wench. I am a lady.” She swept the long blade through his midsection, squealing as she did. He crumpled, and she squealed again.

This alerted another Spaniard, who ran to engage her, his eyes wide. “You’re a girl.”

“Lady.” She slashed at him.

He held his own sword up in defense and parried. His skills were lacking, but he was keen on killing her, which kept her blocking his swings and unable to advance. He had backed her to the helm and around the wheel when Lisette tried a different tactic. She gave him a sly, coquettish smile and lowered her sword a little.

He smiled back, no doubt anticipating a very personal surrender. Stepping into him, she pushed his blade away and brought her knee up between his legs. He doubled in pain, and she struck upward, catching him square in the chest. The tip of her sword hit bone, deflecting before sinking into his body.

He fell and she found she was no longer shocked by putting her blade through flesh. Her pulse racing, she looked around for more uniforms to puncture.

Captain Rocco stood, mid-deck, bodies piled around. Men were screaming on the galleon where Rocco’s crew slashed their way to any and all treasure. His men who had remained on L’Implacable set to work clearing the decks of the bodies, uniformed and pirate. The captain glanced up and pressed his way through the carnage to the wheel, where she stood.

Lisette met him, sword in hand and glaring in defiance. He leaned into her, stinking of gunpowder, and sweat. His fingers caressed her shoulder and traveled down her arm. She winced and glanced down, noting a line of bright red running to her hand, and dripping from her little finger. He wrapped his hand around the hilt of her sword. She let him take it.

“Pretty good with a strange blade.” His voice was low. “You seem to have a scratch.”

She looked back up at him. “It seems that way.”

“Let’s go back to the cabin and clean it up.” He picked up her long shirttail and wiped at her face. “And dry those tears.”

She brought her hand up to her cheeks and felt the wetness, now aware of the catch in her breath. How long she had been crying, she did not know.

He towered over her, and she swayed, her head spinning from the fight and her body still pulsing with agitation. If the captain took her now, she wouldn’t fight him—or maybe she would. Maybe she’d mount him in a frenzy and enjoy it. Maybe she’d kill him. She no longer knew what she was capable of.

All she could do was turn and walk down the steps, back to Rocco’s cabin, where they would be alone. Behind her, the Spanish crew continued to scream.

Posted by Gayle Carline at 11:57 AM No comments: