The write tool for the job.

My apologies - I've been a little MIA lately, but I had a good reason, I think. That is, if you think this is a good reason: 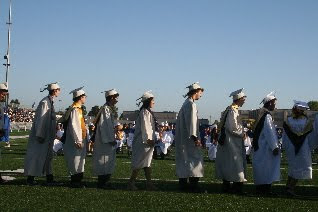 In the midst of Graduation-Palooza, I did a book club at Raytheon Company and the Huntington Beach Library Author's Luncheon. Both were wonderful. I had a great time, sold a few books, and met some swell folks, including David Rosenfelt. Look him up, he's hysterical.

The nice people at each event gave me presents - wasn't that cool? The Raytheon Book Club gave me this little knitted bookmark:

Isn't he cute? (Note, he has little wire glasses on his little googly eyes.) 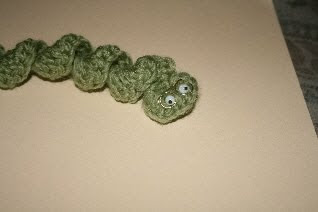 As much as I love this cuddly guy, the Huntington Beach Library knows the way to a mystery writer's heart. They gave me this: 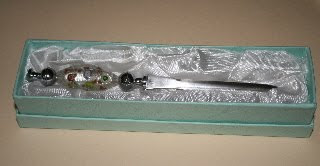 Born in 1917, Dean Martin would have been um, let's see (attempting subtraction in really tired brain), OLD if he'd lived. He died on Christmas day of 1995 and, though we miss him, we at least have his music, his movies, and even his old TV shows.

One of the recurring characters in my Peri Minneopa mystery series (stop laughing - it'll be a series as soon as the second book comes out) is Benny Needles, a Dean Martin fanatic. Not only is he busy stuffing his house with Dino memorabilia, he tries to emulate Dean in every way, which is a difficult chore for a short, chunky, balding, obsessive-compulsive, un-Dino guy. But, hey, who hasn't danced around in their underwear and pretended to be Madonna? You haven't? Really?

Anyway, as a birthday tribute, here's another Benny-centric snippet of the new book:

(NOTE: the setup is that Skip is working late at a crime scene and Peri is being stalked so he doesn't want to leave her alone.)

"Then there's only one thing to do. Call Benny."

"He can hang out with you until I get home."

"But you may work all night."

"So put him up in the spare bedroom."

"Do you know what you're saying? I mean, I like Dean Martin, but this will be a Dino marathon. Movies, TV shows, music, all narrated by Benny. Every piece of trivia will be trotted out for my education." She rubbed the back of her neck. "If I wasn't sick when I found the body, I'll be sick by the time you get home."

"Lock yourself in the bedroom and let him have the family room. He can watch Dino in high def on the flat screen." He took her hand and squeezed it. "Make the call."

Thirty minutes later, Benny's black Caddy rolled into the country club entrance. Peri watched him hesitate at the sight of patrol cars, then make a U-turn and pull alongside the curb at the exit. He got out and waited by the car. As Peri walked toward him, Skip intercepted her.

"I see your limo awaits," he said.

"Wow." She nodded toward Benny. "Complete with a fancy driver."

The streetlight washed down on the little man, dapper in a tuxedo. His white shirt glowed against the black suit, and Peri's eyes were drawn to the red slash of a pocket square across his chest.

"Did I drag you away from a party, Ben?" she asked.

He looked perplexed. "Miss Peri, you told me this was the country club dinner. I couldn't show up in casual wear to pick you up."

"I want you to take her back to my place," Skip told him. "I may not be home for awhile, but you need to stay until either I get home or I send a patrolman. Do you understand?"

Benny's head bobbed up and down in vigorous assent.

"If it gets too late, go ahead and sack out in the spare room."

"Skip's got a nice TV, Ben. Home theater, surround sound. You can watch your Dean Martin movies all night."

He brightened a little. "Okay."

Skip turned Peri toward him and gave her a kiss. "Take care, Doll. I'll be home as soon as I can."

Benny, true to form, hopped in his Caddy and waited for Peri to get in, a feat made harder by the fact he had parked so close to the edge, she had to totter along the narrow curb in her high heels, pushing ornamental shrubbery out of her way to open the car door.

"Watch the paint job," Benny said. "You're gonna scratch it."

They drove away, out to Alta Vista and toward Kraemer Boulevard.

"The cat, Benny. You are still feeding him, right?"

"Of course." She sighed. "Well, I may have a home for him. I met a couple tonight who are interested in adopting him."

"I'm sorry, Ben, I thought you didn't want him. Did you change your mind?"

"But he's kind of interesting. He stares at me all the time, and plays fetch with stuff. Couldn't you keep him so I can visit?"

"Uh-no. Maybe you can visit him at the Nickles' house." She watched the streetlights pass in the darkness, wishing they were already at Skip's. Fatigue washed through her bones and she longed for comfortable clothes and a cup of tea.

Benny finally slid the Cadillac into Skip's driveway and they entered the house, turning off the security system and turning on all the lights. Peri changed into her sweats and then fixed her herbal tea while a constant replay of discovering the body kept looping through her mind. She looked over the counter at Benny, who was fiddling with the surround sound controls to ensure proper modulation of Dino's voice.

"Thanks, Miss Peri, I'll take some tea. Do you have Lipton?"

"Cause Lipton's all I drink. And honey, do you have honey?"

Peri rearranged the pantry, searching for the proper ingredients. "Yes, looks like we have both."

She had just poured hot water over the teabag when Benny added, "I need cream, too. Real cream, not milk or half-and-half."

This is why no one invites you to their slumber parties, Peri thought. "No cream, Ben. Two percent or nothing." She set the mug and condiments on the counter. "Help yourself."

A trumpet's blare heralded the opening credits of a movie.

"Turn it down a little," she said. "We do have neighbors."

Benny scowled but obeyed. He moved backward toward his tea, his focus glued to the screen. Peri leaned over the counter to see what engrossed him so fully. Dotted numbers crawled around while an orchestra blasted a song. After a few moments, she saw it was Ocean's Eleven.

"This looks a lot different from the one with George Clooney," she said.

"Pfft, that hacked-up remake? Half the film this one is. Not even worth the name."

She smiled and tested her tea. It felt like a warm blanket, comforting her. "Maybe, but this one certainly seems less action packed."

"People nowadays expect explosions out of the gate. This movie develops. It gives you time to get to know the characters. Shh-here he is."

Dean Martin walked out of an airport gate and began a conversation with what turned out to be an old Army buddy. Peri moved to the couch and slid into the corner, letting the movie wash over her, happy for the distraction from her memory of that smashed-in skull. The tea continued to soothe; she gripped the mug and held it close, even after she had emptied it.

Halfway through the film, her eyelids lowered in a twilight of sleep. The actors moved about casinos, signaling each other and running metal objects around doors. She had missed some of the plot, but she recognized the teamwork. In her dreamlike state, Frank Sinatra became Nikki Keller, and Dean Martin was Kim Patterson. Peri thought about the bonds of friendship, and the recent events.

What wouldn't she do to help Blanche?

Happy Birthday, Mr. Martin. I may cook Italian tonight, just in your honor.