A Halloween tale to be told

I've been working on the Dragon Shadows Trilogy and its release so relentlessly, I let my next project sit on the shelf. It's a little cozy novella featuring Hazel, an amateur mouse sleuth. The story is in its third act and will be finished soon, but before I could write one more scene, there was a story in my brain that wouldn't leave me alone.

A tale best told during All Hallows Eve, a tale best heard by candlelight. Sit back with a glass of port--or perhaps a smoked cocktail would fit better. Smoked old-fashioned, anyone? Enjoy.

Stuart’s entire body trembled violently, making it difficult to hold his cell phone, much less poke at the screen. After five failed attempts, he at last selected Jake’s number and held the phone, shaking, to his ear.

The phone was silent as usual while it decided whether there was enough service coverage to complete the call. He considered putting it on speaker but wasn’t certain if his finger could find the button. Also, he feared letting anyone else hear the conversation, even though he was alone in his apartment.

“Wha?” Rustling noises cluttered the background, accompanied by a moaning yawn. “Dude, I just woke up.”

Stuart ran his hand across his head. “I can’t tell you over the phone. But it’s bad, Jake. I’m in trouble and it’s bad. Please.”

“Mm-kay.” His friend did not sound convinced or hurried, but he was always true to his word. “Gimme five and I’ll be on my way.”

Stuart ended the call and sat at the edge of his bed in the silence. He still shook, although the quaking had localized itself to his knees. The bed rocked underneath him, a quiet squeak reminding him of last night’s activities, activities that had led him to the spot he was now in.

He’d swiped right on Tinder to what appeared to be the most beautiful woman he’d ever seen. She was eager to meet, which made him uneasy. What if that gorgeous creature was just a product of Photoshop?

But she did not disappoint. He’d never seen a woman who turned every head in the place as she did when she walked into the pub. Gossamer layers of a short wrap dress revealed glimpses of toned thighs, the plunging v-neckline teasing at full breasts. Her long blue-black hair swung about her shoulders, shiny and thick, bouncing around her face without intruding upon it. The flow of her hair, the ruffling of the dress as she moved made it look as if she might take flight.

Stuart’s first thought leapt to song lyrics. Raven hair and ruby lips. He watched her large dark eyes skim the room like a predator hunting for a meal. When she spotted him, her mouth turned upward at the corners, and he felt a brief stab of icy fear before lust took control of his body.

If only I’d left it there, if only I’d left her there. He rubbed his head, pressing his temples. In an abrupt move, he stood and strode to the bathroom. His right hand caressed the doorknob, feeling the cold metal. He turned it, felt the click of the gears, took a deep breath.

Sighing, he let go and moved away. If I look again, I might hurl.

Vigorous knocking at the front door startled him and he ran to open it. Jake stood in the hall with a curious expression.

“Shh, get in and be a little quieter, okay?” Stuart grabbed Jake’s arm and pulled him inside. “We don’t need to wake the neighbors.”

“I don’t even know where to start.” Stuart strode across the living room and back, pacing as he talked. “I did like you said and went on Tinder last night. Got a date right away.”

“No, not great!” He stopped. “Well, part of it was great. She was drop-dead, I mean, I don’t know if there’s another girl that beautiful anywhere.”

“Wow, and she swiped right on you?”

Stuart scowled at him. “Yes, thanks, she did. Actually, I was wondering that, too, but she wanted to meet right away, so we agreed to Quincy’s. We had drinks, then dinner, got along great, yadda yadda, then she says it’s time to go to my place.”

“Whoa-ho, that was fast.” Jake plopped onto the couch. “Did you two…?”

“Did we! Best sex of my life.” Stuart sat beside him. “I mean, I’m a simple guy, got maybe one button a girl’s gotta press. Phoebe found buttons I never knew I had.”

“Dude, tell me you didn’t call me over here to brag.”

“No!” Stuart jumped up and resumed his pacing. “Like, I thought she was really enjoying it, but after we’d done it nine times—”

“Shut up, it was crazy, we did it more than I thought was possible. Then, she takes one of the candles we’d lit and says, ‘I’ll be back soon,’ and heads to the bathroom. I asked her if everything was okay and she goes, ‘Really, you were great, but I have a special itch that needs scratched.’ Goes into my bathroom and shuts the door.” He stopped in the middle of the room, his shoulders sagging, deflated.

Stuart pointed toward the bedroom. “Go open the bathroom door and look.”

Jake rose and did as he was directed. As he did, Stuart was hoping he had imagined the entire thing and his friend wouldn’t see what he saw.

“What the hell?” Jake yelled from the bathroom.

“I couldn’t get that lucky,” Stuart mumbled and joined him.

Jake was pointing at the bathroom floor. “Are these?”

“Yes, like, human. Human remains.” Stuart waved his hand in the direction of the mess. “You’ll observe the bits of bone.”

“I don’t get it. She lit herself on fire with the candle?”

“Doesn’t seem possible.” Stuart shrugged. “I didn’t think a candle would burn a human to ashes. And I never heard any screams. Why didn’t she scream?”

The two men stood and studied what remained of Phoebe for several moments.

“How should I know? Do I call the cops?”

Jake stared at him. “And tell them what? ‘I’d like to report a case of spontaneous human combustion.’”

Stuart shook his head. “I’m stuck, Jake. This is either gonna end with me in prison or on the front page of the tabloids.”

“Not if there’s no evidence.” Jake rubbed his chin. “Get a trash bag and the broom.”

Stuart’s eyes widened. He looked down at the remains, back up at his friend, then nodded and went to the kitchen.

“Make sure we get her clothes, too,” he said.

Ten minutes later, they were at the front door, Jake jingling his keys and Stuart holding the bag. Jake turned to Stuart, “Where are we—hey, what happened to your hair?”

“I don’t know.” Stuart opened the camera on his phone and held it up. His short brown hair was stylishly scruffy, but now there was a white streak running across both temples. He held the camera closer—there were lines at his eyes, around his mouth that he swore he didn’t have yesterday. “Wow, last night was rougher than I thought. I look like my dad.”

“Let’s take care of this.” Jake pointed to the bag. “Maybe your face’ll relax.”

It was a half-hour drive from the apartment in San Diego to the southernmost side of the Otay Open Space Preserve, another hour driving around to find a recessed location to hide a bag, and another half-hour back to the city where Stuart and Jake could sit silently at a bar and drink themselves numb.

Stuart finally stumbled home sometime after midnight and passed out on the couch, promising himself to sell his bed, end his lease, and move to Montana in the morning.

Deep in the brush not far from the US/Mexico border, a trash bag rustled in the wind. It continued to flutter and puff as its contents expanded and stretched, until a lithe graceful arm reached from the opening and pulled the bag apart. A beautiful woman emerged, dark-haired, dark-eyed, and naked.

She felt around the bottom of the bag and smiled. “How polite of him to include my clothes.”

After dressing, she walked out of the brush and toward the road. That never gets old, she thought as she strolled along the pavement, feeling refreshed and renewed. And as long as mortal men are so easy, neither will I.

Posted by Gayle Carline at 10:19 PM No comments:

After a long trip, the destination looms

The first book in my fantasy trilogy is being released this Friday. I've written the entire trilogy, over 300,000 words spread across three books. It feels like I just wrote them, and yet I began this journey in November of 2015. Seven years! Here's the original blog post in which I take the first step: https://gaylecarline.blogspot.com/2015/11/mrs-carline-builds-her-dream-dragon.html

The story has gone through iterations of sometimes immense proportions. I began writing it in third person, changed it over to first person, and changed it back again. At one point, I believed I might have accidentally ended up in Hades, doomed to spend eternity rewriting a manuscript from first to third person and back again. The only good thing to come from that is there would be some new word invented meaning, "to do and redo a task over and over," like sisyphean.

Gaylepovian: The act of relentlessly changing a story's POV until the writer's brain collapses.

This is where the book started: 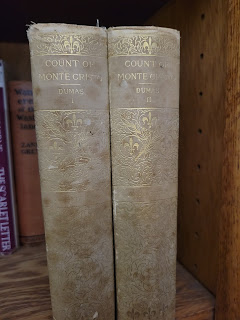 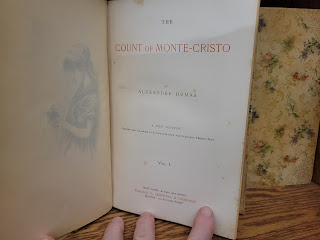 I have an old boyfriend, Perry Kaufman, to thank for introducing me to used bookstores in Chicago, where I found this magnificent copy of The Count of Monte Cristo, revised and published in 1894.

I began writing a microscopic version of the count's story, gender-twisted to a tale of a young noblewoman who is betrayed by her so-called friends. I was thinking it would be perhaps a novella, but nothing more than a standard novel.

And then the dragons came, dragons that arrived for a reason and refused to leave until the entire story was told in all the books and all the words.

As with each book, I'm tremendously proud of its release and consider it my favorite. I've worked hard to help it find its readership and I hope they love it, too. If you read it and love it, I promise you will love the second book and the third.

And after the third book, who knows where else we may go?

Posted by Gayle Carline at 8:02 PM No comments: